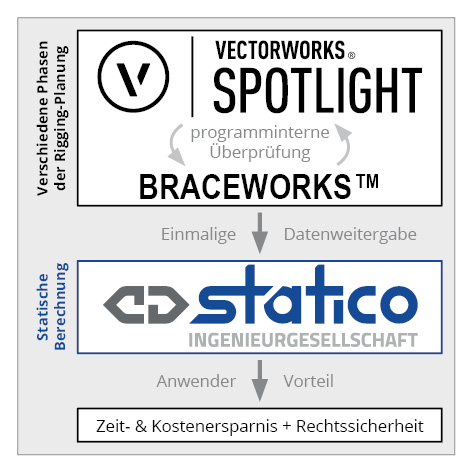 Novel thinking and innovation in working methods and tools were at the top of the list when founding statico Ingenieurgesellschaft mbH. In the last decade, Vectorworks has become the most widely used CAD software for technical design in the field of event technology. It’s only logical that statico Ingenieurgesellschaft was the first engineering firm in the industry to invest in Vectorworks to ensure loss-free information exchange.

This was followed by close cooperation with the developers of the Braceworks structural module for Vectorworks. statico Ingenieurgesellschaft participated continuously in the beta test phase as an advisor and made comparative calculations between the established calculation systems and the results from Braceworks. After a short time, it was clear that the results were in agreement. After that the first projects were carried out, from planning to implementation, including structural calculations with Braceworks.

Through close cooperation with the developers of the new Vectorworks addon Braceworks, the engineers from statico have already been able to support the development of Braceworks in the beta test phase. It quickly became clear that the combination of technical planning with Vectorworks Spotlight and evaluation with Braceworks leads to gains in efficiency. Even during the design stages, parameters such as truss utilization and suspension-point loading can be checked continuously. The preparation of preliminary design results and communication of them to different engineers, which was necessary until now, is no longer necessary in order to obtain initial results and create further designs. The designer himself/herself monitors preliminary results and changes. By means of the controlled data transfer, the final structural proof can then be provided in an uncomplicated way by experienced structural engineers. Time-consuming and risky intermediate steps are a thing of the past.

Vectorworks & Braceworks, together with statico Ingenieurgesellschaft, set a milestone in technical planning at the Eurovision Song Contest 2017. A complex system consisting of 735 rigging points, 3300m of trusses, 1816 lighting fixtures, 212 tonnes of hanging material, 112 CyberHoist chain hoists and a textile freeform of over 30m was used for the stage.